One of my little side projects is to explore historical images and maps of Bath and the surrounding areas. I like understanding the contrast between how Bath used to look and how it is today. It’s grown and changed a huge amount over the years. It gives me a strong sense of place and history.

There is a rich archive of photographs and images of the city and area that were digitised for the Bath in Time project. Unfortunately the council has chosen to turn this archive into a, frankly terrible, website that is being used to sell over-priced framed prints.

The current version looks like it’s based on a default ecommerce theme for WordPress rather than being designed to show off the richness of the 40,000 images it contains. Ironically the @bathintime twitter account tweets out higher resolution images than you can find on the website.

This is a real shame. Frankly I can’t imagine there’s a huge amount of revenue being generated from these prints.

If the metadata and images were published under a more open licence (even with a non-commercial limitation) then it would be more useful for people like me who are interested in local history. We might even be able to help build useful interfaces. I would happily invest time in cataloguing images and making something useful with them. In fact, I have been.

In lieu of a proper online archive, I’ve been compiling a list of publicly available images from other museums and collections. So far, I’ve sifted through:

I’ve only found around 230 images (including some duplicates across collections) so far, but there are some interesting items in there. Including some images of old maps.

So you can take the metadata and links and explore them for yourself. I thought they may be useful for anyone looking to reuse images in their research or publications.

I’m in the process of adding geographic coordinates to each of the images, so they can be placed on the map. I’m approaching that by geocoding them as if they were produced using a mobile phone or camera. For example, an image of the abbey won’t have the coordinates of the abbey associated with it, it’ll be wherever the artist was standing when they painted the picture.

This is already showing some interesting common views over the years. I’ve included a selection below.

Views from the river, towards Pulteney Bridge

Southern views of the city

Looking to the east across abbey churchyard

Views of the Orange Grove and Abbey

It’s really interesting to be able to look at the same locations over time. Hopefully that gives a sense of what could be done if more of the archives we made available.

There’s more documentation on the dataset if you want to poke around. If you know of other collections of images I should look at, then let me know.

And if you have metadata or images to release under an open licence, or have archives you want to share, then get in touch as I may be able to help.

This weekend I started a side project which I plan to spend some time on this winter. The goal is to create a web interface that will let people explore geospatial datasets published by the three local authorities that make up the West of England Combined Authority: Bristol City Council, South Gloucestershire Council and Bath & North East Somerset Council.

Through Bath: Hacked we’ve already worked with the council to publish a lot of geospatial data. We’ve also run community mapping events and created online tools to explore geospatial datasets. But we don’t have a single web interface that makes it easy for anyone to explore that data and perhaps mix it with new data that they have collected.

Rather than build something new, which would be fun but time consuming, I’ve decided to try out TerriaJS. Its an open source, web based mapping tool that is already being used to publish the Australian National Map. It should handle doing the West of England quite comfortably. It’s got a great set of features and can connect to existing data catalogues and endpoints. It seems to be perfect for my needs.

I decided to start by configuring the datasets that are already in the Bath: Hacked Datastore, the Bristol Open Data portal, and data.gov.uk. Every council also has to publish some data via standard APIs as part of the INSPIRE regulations, so I hoped to be able to quickly bring a list of existing datasets without having to download and manage them myself.

Unfortunately this hasn’t proved as easy as I’d hoped. Based on what we’ve learned so far about the state of geospatial data infrastructure in our project at the ODI I had reasonably low expectations. But there’s nothing like some practical experience to really drive things home.

Here’s a few of the challenges and issues I’ve encountered so far.

The goal of the INSPIRE legislation was to provide a common geospatial data infrastructure across Europe. What I’m trying to do here should be relatively quick and easy to do. Looking at this graph of INSPIRE conformance for the UK, everything looks rosy.

But, based on an admittedly small sample of only three local authorities, the reality seems to be that:

It’s important that we find ways to resolve these problems. As this recent survey by the ODI highlights, SMEs, startups and local community groups all need to be able to use this data. Local government needs more support to help strengthen our geospatial data infrastructure.

This weekend I published scans of over 2000 historical playbills for the Theatre Royal in Bath. Here are some notes on whey they come from and how they might be useful.

The scans are all available on Flickr and have been placed into the public domain under a CC0 waiver. You’re free to use them in any way you see fit. The playbills date from 1812 through to 1851. This is the period just before the fire and rebuilding of the theatre in its current location.

The scans are taken from 5 public domain books available digitally from the British Library. All I’ve done in this instance is take the PDF versions of the books, split out the pages into separate images and then upload them to Flickr, into separate collections.

This is a small step, but will hopefully make the contents more discoverable and accessible. The individual playbills are now part of the web, so can be individually referenced and commented on.

For example there are some great images in the later bills. And I learned that in 1840 you could have seen lions, tigers and leopards. 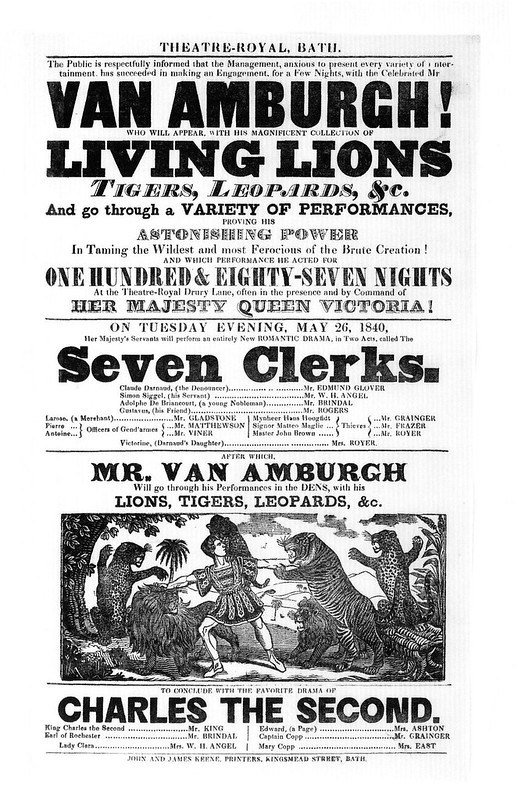 And this playbill includes detail on the plot and scenes from a play called “Susan Hopley” and an intriguing reference to “Punchinello Vampire!”. 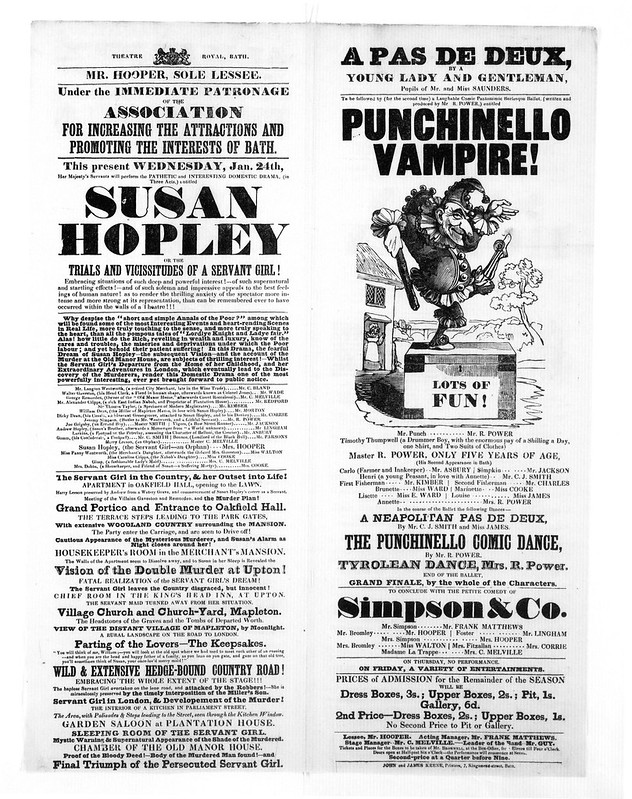 As they are all in the public domain, then images will hopefully be of interest to Wikipedians interested in the history of Bath, the theatre or performers such as Joseph Grimaldi. (I did try adding a reference to a playbill myself, but had this reverted because I was “linking to my own social media site”).

There’s a lot of detail to the bills which it might be useful to extract. E.g. the dates of each bill, the plays being performed and details of the performers and sponsors. If anyone is interested in helping to crowd-source that, then let me know!